Expanding dead zones in coastal marine waters worldwide has caused water quality to decrease.  In addition, dead zones decrease fisheries, which are important to the economy.  To better understand dead zones and their impacts on ecosystems and people, researchers ask these questions: (1) How do natural and human factors contribute to dead zones?  (2) How are ecosystem processes and animal population dynamics altered by dead zones?  Because of their complex nature, these questions are tackled by diverse scientific teams including biologists, chemists, and physicists. 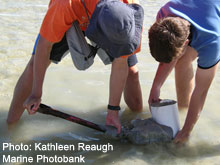 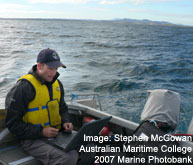 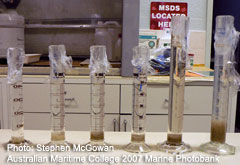 Questions about dead zones must be approached from a variety of scientific angles. By conducting field and laboratory work, scientists can learn more about how and why dead zones are formed.

Researchers investigating the causes and consequences of dead zones include scientists, technicians, and students trained in a range of relevant disciplines.  Studies on dead zones require experts, such as physical oceanographers, who describe the movement of coastal water, the stratification and mixing of these waters, and the climatic controls on these processes. Biogeochemists describe the inputs, chemical transformations and cycling of nutrients.  These nutrients can increase the growth of organic matter, which in turn increases oxygen consumption. Marine ecologists are needed to measure the biological processes that determine photosynthesis, consumption, respiration, and sinking of living and dead algal cells. Certain members of these research groups organize these data into computer models that link physics, chemistry, and biology to calculate how dead zones are formed, dissipated, and moved in space and time.

How do we do research? 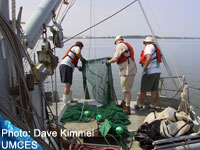 Dead zones are complex environmental problems that require a variety of approaches to help us understand their behavior.  The types of research programs scientists use to study dead zones can be categorized into four major areas: monitoring, field experiments, lab experiments, and modeling.  First, scientists monitor the conditions of the water by going on research cruises or setting buoys that contain instruments to measure oxygen, temperature, salinity, and a host of other variables.  On these cruises, researchers also do a variety of field experiments, where they collect samples of fish, algae, or sediment, and measure important rates like feeding, photosynthesis, or nutrient changes.  Often, scientists take these samples back to the laboratory, where they can perform additional experiments, which may include exposing the water or sediment sample to changing environmental conditions and measuring how it responds.  Lastly, scientists may take all the information they learned from monitoring and from their field and laboratory experiments to build ecological models to predict, for example, how dead zones form and change over time. 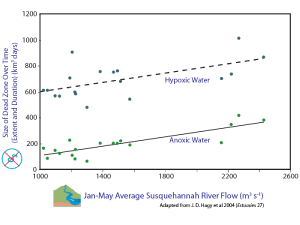 The factors that drive dead zones: Although many factors contribute to the onset, extent, and duration of dead zones, the amount of river flow is perhaps the most important cause of the extent and duration of dead zones in the Chesapeake Bay and other river-dominated estuaries.  River flow effects dead zones in several ways: (1) River flow causes a separation of the surface water from the bottom water, where the bottom water cannot obtain oxygen from the atmosphere.  Scientists call this process stratification. (2) River flow delivers nutrients to the estuary from the surrounding land, which grow more algae in the water that will eventually die, sink to the bottom, and be consumed by bacteria through an oxygen-eating process. (3) River flow also delivers organic material (soil, dead leaves, etc.) to the estuary from the surrounding land, which like dead algae, are also consumed by bacteria through an oxygen-eating process.  Thus, years with the highest river flow have the most extensive dead zone volumes (see adjacent figure).  Many other factors can cause the dead zone volume to be larger or smaller.  Higher temperatures reduce the amount of oxygen that water can hold and also speed up oxygen-eating processes.  Wind mixes oxygen from the atmosphere into deeper, oxygen-poor waters, resulting in higher oxygen levels.  Sediments release more nutrients into the water when oxygen gets too low, and these nutrients could support more algal growth, resulting in further oxygen consumption. 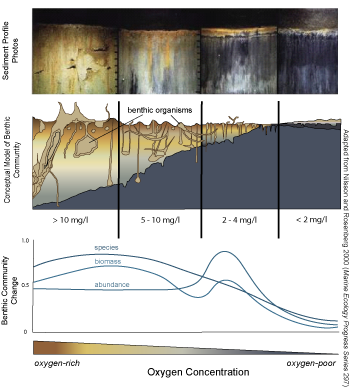 The effects of dead zones on the ecosystem: The benthic community changes in dead zones because oxygen levels are reduced in the sediment.  Organisms that live in the sediment, such as worms, have to adapt to oxygen-depleted sediments.  Tube-building polychaetes build tubes higher into the water column, and larger, deep-burrowing worms die off or leave the area.  The sediment community shifts to smaller numbers of small surface-dwellers with limited diversity.  Studying the consequences of this change in the community structure is an active area of research. Without animals living in the sediment, the sediment is not mixed.  If mixing does not occur, nutrient (nitrogen and phosphorus) cycles are altered.  Current research investigates the biogeochemical interactions between the presence of benthic organisms and nutrient cycling.The degradation of bottom habitats also affects the fish community.  Benthic dwelling fish are force

d to migrate away from low-oxygen areas.  Those that have a higher tolerance to low-oxygen conditions may still inhabit the area, but because the number of benthic worms is decreased, the fish have trouble finding adequate food. Researchers monitor the shifts in the distribution of fish with respect to the changing region of dead zones in the Chesapeake Bay to gain an understanding of how dead zones impact the size of commercial fish populations.

What are the challenges for future dead zone research?

Research related to the formation and effects of dead zones has produced a large body of knowledge useful for understanding and managing coastal ecosystems. This information is being used to establish strategies for reducing the scale and impact of dead zones in many coastal areas; however, continued population growth and economic development in the watershed of these regions along with long term changes in climatic conditions create difficult challenges for future research and management.  In addition, recent studies in the Chesapeake Bay, the northern Gulf of Mexico, and the Baltic Sea have identified troubling trends in these coastal ecosystems.  For example, the same levels of nutrient loading from land is currently producing substantially more dead zones than occurred in two previous decades