What is the “Dead Zone”?

In coastal marine environments, “Dead Zones” are regions where oxygen concentrations are very low. This condition of oxygen deficiency, known as hypoxia, is caused by an interaction between biological, chemical and physical factors. In the absence of sufficient oxygen, animals and plants either die or leave the dead zone. Although these affected waters are called dead zones, many bacteria can thrive in this region, feeding on the abundant food produced in the overlying waters. Hypoxia is a natural phenomenon that occurs periodically in coastal waters around the world. During the last 50 years, however, increases in key pollutants derived from human activities on land have thrown many coastal ecosystems out of balance, resulting in expanded dead zone regions. 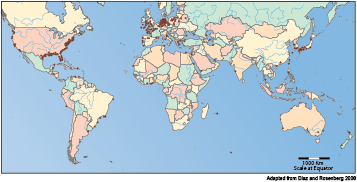 Where do they occur?

Dead Zones occur around the world in both fresh and saltwater systems like Lake Erie, Chesapeake Bay, northern Gulf of Mexico, and the Baltic Sea. Although Dead Zones occur naturally in some coastal area, the frequency and duration of hypoxia is increasing worldwide, especially in coastal waters adjacent to densely populated watersheds. 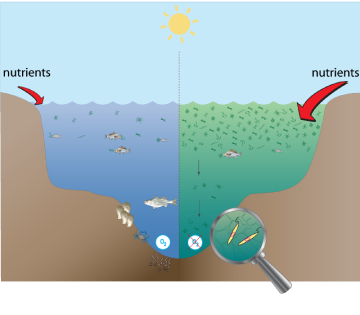 How does a “Dead Zone” form in Chesapeake Bay?

Many coastal waters like Chesapeake Bay are susceptible to the formation of dead zones due to a combination of biological and physical factors. First, nutrients from agriculture and urban development within the Bay’s watershed, or the area of land that drains into a body of water, are washed into the Bay in excess quantities. These excess nutrients fertilize the rapid growth of microscopic plants, called phytoplankton, in a process known as eutrophication. When the phytoplankton use up all the nutrients, they die and sink to the bottom, where they are decomposed by bacteria. The bacteria respire as they decompose the phytoplankton, consuming oxygen.

Furthermore, oxygen in the air can normally mix to the bottom by tides and winds to replenish the oxygen consumed by bacteria. However, in the summer, fresh less dense water flowing into the Bay from rivers essentially sits on top of salty denser water coming in from the Atlantic Ocean. This process is called stratification. A barrier is formed between the separated masses of water, hindering the mixing of oxygenated surface water down to bottom oxygen-depleted waters. The result is hypoxia, or a “dead zone.” 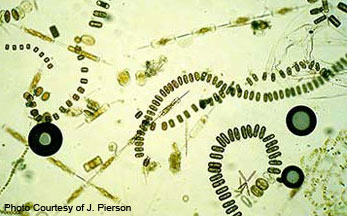 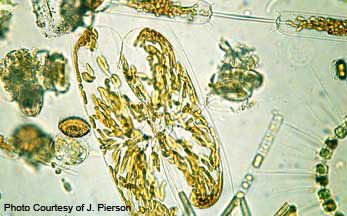 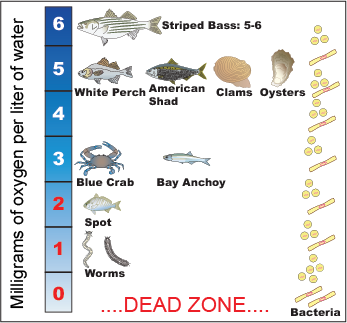 What are the effects of hypoxia?

Low oxygen levels radically alter the ecology of coastal systems. Fish and mobile invertebrates (like shrimp and crabs) can migrate out of hypoxic areas. Plants and animals that are slow moving or attached to the bottom (seagrass, worms, and clams) cannot escape from the dangers of hypoxic water and will die with extended exposure. 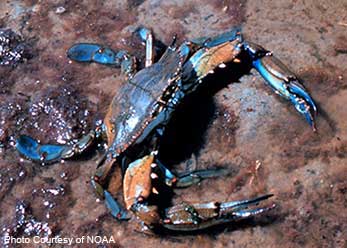