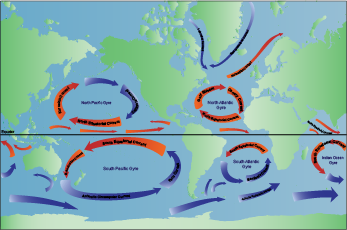 The Motion of the Ocean

Sea water is always flowing back and forth, and also up and down.  Winds, tides, and fresh water flowing off the land (rivers for example) work together to move water from one place to another.  The Earth’s rotation, called the Coriolis effect, and the coasts shape the circulation. The deep circulation of the global ocean is driven by density differences between the cold polar regions and the rest of the ocean.  Warm, salty water delivered to the polar regions is cooled, forming dense water that sinks to the deeps and then spreads throughout the world ocean.

Buoyancy differences in smaller bodies of water such as lakes and estuaries result in the separation of water into layers (stratification), with the more dense, salt water on the bottom and lighter, fresh water on the surface. The primary source of fresh water in estuaries and coastal oceans is from rivers with a salinity of 0-5, while salt water from the open oceans has a salinity of 32-35.  Stratified water can be mixed by cooling and sinking surface water and/or by wind-generated water movement like waves and currents.  Scientists can determine if there is mixing of top water and bottom water by looking at temperature, salinity and oxygen readings at increments from the surface to the bottom of the water column.  If these parameters are the same throughout the water column, then the water is well mixed. However, if there are differences (e.g. cooler, higher salinity water toward the bottom) from top to bottom, then the water column is stratified. Whether or not the water column is mixed can affect organisms living in this environment. For example, the main source of oxygen to bottom water is from mixing with surface water, which is in direct contact with the air. If there is no mixing, oxygen is depleted from the bottom water and organisms will either move or die.

Currents carrying water past the continental shelves influence climate patterns as well as the weather we experience every day.  Currents continually transport the sun’s heat from the equator towards the poles.  You may know that the climate in England is warmer than that of Newfoundland, even though both areas are on the same latitude.  The reason is because predominant wind patterns bring warm ocean temperatures from the Gulf Stream current to England. Have you noticed that air temperatures can be cooler by the ocean in summer, but warmer in winter?  In the "Weather and the Ocean" exercises below, we will explore the influence of the ocean on areas near you.

Activity: Local Weather and the Ocean

Scientists use real-time data and information from ocean observing systems to interpret the ocean conditions and make predictions about weather and climate.  They examine information from observing buoys, such as air and water temperature, currents, and wind as well as data from satellites and other instruments to forecast daily weather, extreme weather events such as hurricanes, and large scale shifts in weather patterns like the El Niño/La Niña Southern Oscillation (ENSO). 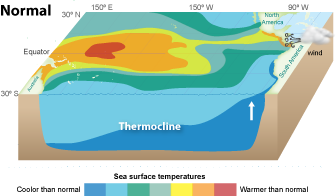 Interaction between the atmosphere and the ocean can cause changes in dominant wind and current patterns, which in turn can have strong effects on our weather. One of the better-known changes is the El Niño/La Niña Southern Oscillation (ENSO). Under normal conditions, winds from the east push water away from South America, causing upwelling of deep cold water off the coast of Peru. Under La Niña conditions, stronger east winds cause even more upwelling.  When the wind shifts and blows from the west under El Niño conditions, upwelling stops and warm water is pushed towards South America, drastically changing climate patterns in many regions of the world. 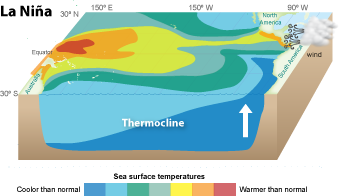 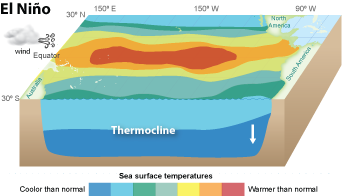 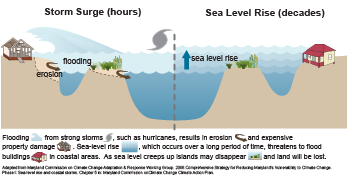 Have you ever been at a beach or dock and noticed that the water level changes throughout the day?  Changing water height due to tides, winds, and other factors makes measuring sea level difficult.  Sea level is defined as the height of water relative to a   benchmark on land, and it is measured over a long period of time so that these effects are factored out.  During the past decades, the sea level has been rising due to global warming.  As water warms it expands, resulting in inundation of coastal areas.  Additionally, global warming is causing polar ice caps to melt, also contributing to the rise in sea level.

Storm surge is the rise in sea height due to the “pushing” up of water onto land by winds from storms, such as hurricanes. Factors determining the height of the storm surge include the strength of the wind in the storm, speed of storm, slope of the sea floor leading to the shore, and stage of tide (high or low).