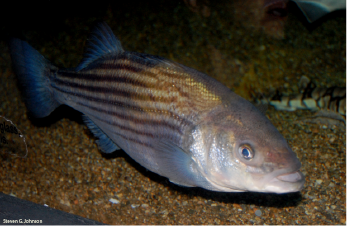 Fish and other swimming critters move and migrate due to a number of biotic and abiotic factors.  They actively swim away from dangerous situations like predators, low oxygen, unfavorable salinities, and harsh temperatures into more favorable habitat.  For example, striped bass (often also known as rockfish) live in the coastal waters of the United States are fished by both commercial and sport fishermen.  Striped bass release their eggs (spawn) in the fresh waters of estuaries such as the Chesapeake Bay where they grow as young fish.  As the fish get older they migrate to the ocean, but eventually return to the estuary to spawn.  During their time in the estuary, striped bass are at the mercy of water conditions (in particular temperature and oxygen concentrations) for survival.

Activity: Where Could the Stripers Be?

Young Fish and Shellfish are at the Mercy of Currents

Most young (juvenile) fish and shellfish cannot swim well and are at the mercy of water currents.  During this life stage, organisms are known as plankton. Freshly hatched fish and shellfish, called larvae, often look very different from their parents and do not yet have the fins that will eventually propel them through the water.  Larvae are very vulnerable at this time during their lives.  Physical water conditions, such as temperature, salinity, and oxygen, must be within an organism’s range of tolerance.  If the larvae are carried to waters that are inhospitable to them, they may die.  These young aquatic organisms must also have plenty of nutritious food in order to survive and become adult fish or shellfish. 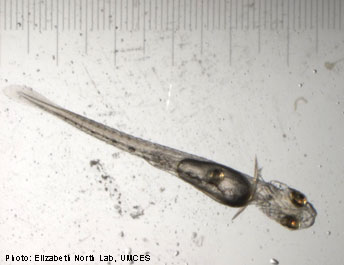 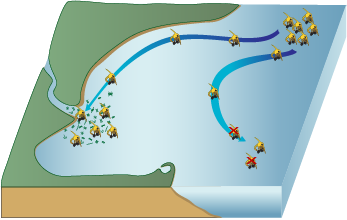 Global Climate Change May Affect Where Aquatic Organisms Can Live

Global climate change is best known for warming the Earth, but may also alter many other parameters in the aquatic environment, such as temperature, salinity, oxygen concentration, and ocean acidity.  Increases and decreases in environmental conditions may make a habitat inhospitable to the organisms that live there.

Have you ever wondered why coral reefs do not grow along the coast of Maine?  Corals, like many  organisms, can only survive within a narrow range of environmental conditions, called an organism’s range or tolerance.  For example, coral reefs need warm water and plenty of light.  Therefore they can generally only live within 30° north and south of the equator.  The coastal waters of Maine are too cold, therefore outside coral’s range of temperature tolerance.  However, water can also be too warm for coral growth. Global warming is causing “coral bleaching” and, as a result, loss of important coral reef ecosystems worldwide.

Other organisms cannot tolerate warm water and are confined to areas of the ocean where temperatures remain relatively cold throughout the year. For example, eelgrass generally inhabits cooler northern latitudes.  With global warming, scientists hypothesize that eelgrass may no longer be able to live in the lower boundaries of its range, potentially impacting the organisms that depend on eelgrass in these regions.

Activity: Where do the Critters Live? 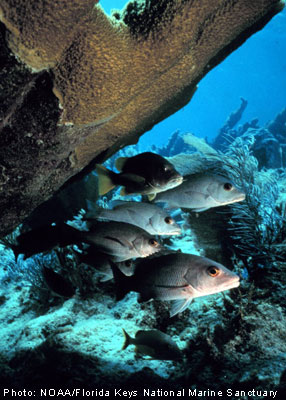 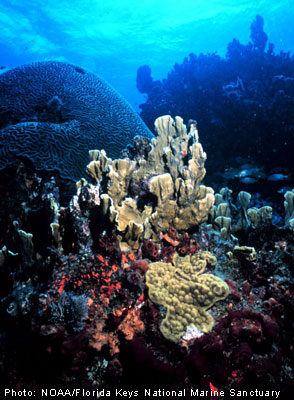 Global warning threatens coral reefs like those pictured above. 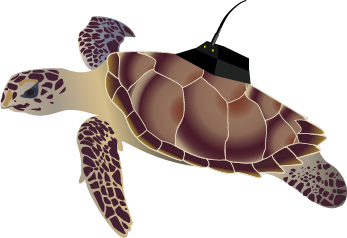 OOS Follow Animals as They Travel Through the Oceans

Did you know that bluefin tuna can swim more than 45,000 miles over their lifetime?  Many fish, mammals, seabirds, and reptiles swim or fly across the ocean in pursuit of food or to reach nesting grounds.  Sometimes, researchers still do not know why a marine species migrates.  OOS are attached to many different marine species to track them through their travels and provide information about the environment in which they are swimming.  Understanding where these animals forage and breed provide managers with valuable information about habitats and natural resources that are crucial for species survival.