Bacteria are a type of microbe, or organism so small that it can only be seen with the use of a microscope. Microbes are diverse and include organisms from each of the three domains of life: Prokaryotes (bacteria), Archaea, and Eukaryotes (including protists such as diatoms, ciliates, and dinoflagellates). Microbes also include viruses.

Hint:  Mouse over the photos below to lean more about each type of microbe. 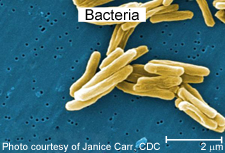 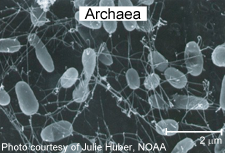 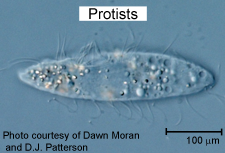 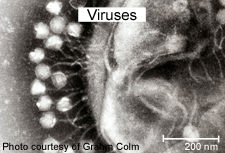 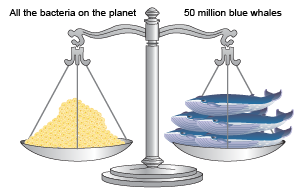 Bacteria are the oldest type of living organism on earth. Evidence of bacteria extends back at least 3.5 billion years. These early microbes filled Earth's atmosphere with oxygen over millions of years, allowing oxygen-breathing life to exist.

Even though each bacterium weighs less than a quadrillionth of a gram, the weight of all bacteria in the world is roughly one billion tons (a gigaton). This is about equal to the weight of all plants on Earth.  In other words, the biomass, or mass of living organisms, of bacteria roughly equals the weight of 50 million blue whales.

How big are bacteria? 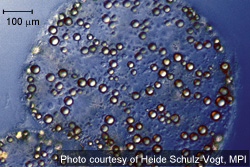 Each bacterial cell is very small and typically ranges in size from about 0.2 – 2 micrometers (µm). One µm is equal to one millionth of a meter, and is so small that hundreds of bacteria can fit into a space the size of the period at the end of this sentence.

Fun Fact! The largest known species of bacteria was found in 1999 in the ocean sediments of Namibia, a country in southern Africa. Individual cells can be as large as 0.75 mm (750 µm), which is visible to the naked eye.  The golden spheres inside the cell are accumulations of the element sulfur (S) from the surrounding environment.  The shiny appearance and tendency of cells to group together in long strings inspired this species' name:  Thiomargarita namibiensis ("Sulfur pearl of Namibia").

How do bacteria reproduce?

Bacteria reproduce quite differently from plants and animals.  The most common form of bacterial reproduction is called binary fission, where a single cell splits into two identical daughter cells.  This is an example of asexual reproduction because the genetic material of the offspring comes from one parent.  Bacterial populations can grow very rapidly, doubling in size as quickly as every 20 minutes.

Hint:  Click circles above each time period to compare generation times of bacteria and other species.

Where do bacteria live?

Bacteria are incredibly numerous and are found basically anywhere you can imagine.  In fact, just 6 liters (1.5 gallons) of seawater contain more bacteria than there are people on Earth!  Some Bacteria are referred to as extremophiles because they are adapted to survive in harsh environments, like hydrothermal vents (hot volcanic vents) in the ocean floor, very salty waters of the Dead Sea, sea ice, and places without oxygen. Everywhere we look, we find bacteria....including in people!

Voyage to the Deep: More hydrothermal vent information from the University of Delaware.

Why are bacteria important? 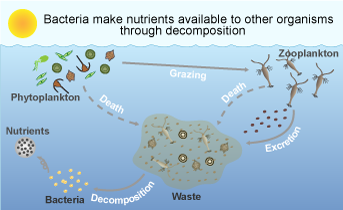 Name a chemical element or compound of elements, and there are bacteria are using it, releasing it, recycling it, and transforming it. This movement of elements through living matter, the atmosphere,  oceans, and sediments is referred to as cycling.  The carbon and nitrogen cycles are two of the most important global cycles, and bacteria play a key role every step of the way.  Without bacteria, these cycles would not occur and life could not exist!

Bacterial decomposition is an important part of nutrient cycling, and bacteria can decompose dead organisms as big as whales or as small as other microbes. They break down organic molecules formed by biological processes, making the nutrients in these molecules available for use by other organisms, such as plants. The microbes themselves can also serve as food for larger organisms.  Some elements, such as iron (Fe) are rare but important in the ocean, making it important to recycle them.  When an organism dies or releases an iron-containing compound,  microbes "catch" that and get all the iron out of it before it can sink too deep. 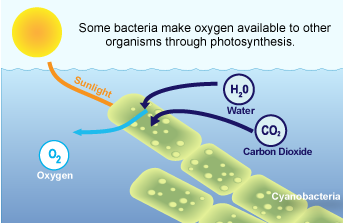 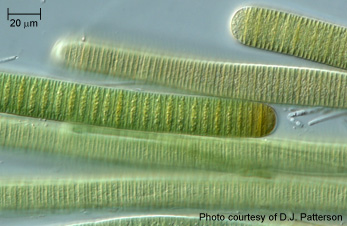 One group of bacteria called cyanobacteria carry out photosynthesis. They take carbon dioxide (CO2) from the air, turn it into organic parts of their own cells, and release oxygen (O2) just like plants. Half of the primary production, done on Earth is in the ocean, and half of that is done by bacteria!

In addition, bacteria are terrific chemists. Almost any chemical reaction can be done by at least one group of bacteria. Some can take nitrogen gas (N2) from the air and turn it into organic parts of their own cells—they can do the reverse too. Others play a key role in the sulfur (S) cycle, which is linked to cloud formation, so even though they are tiny bacteria affect the weather of our planet.