Microbial ecology is a very young and growing field and basic questions are still important.  The oceans form the majority of the earth, and bacteria form the majority of biomass in the oceans. We need to learn more about community patterns and functions of these necessary organisms, as well as predict how they may respond to environmental changes, impacting life on Earth!

Are all bacteria the same?

Although bacteria can be found almost everywhere on Earth, scientists are finding that the composition of bacterial communities can differ widely.  We often talk about bacteria in terms of "types" or "groups", meaning clusters of genetically similar bacteria. Let's compare bacteria to insects. There are many different types of insects (ants, beetles, dragonflies, etc.) and each type of insect does different things (some pollinate plants, some eat other insects, etc). In addition, there are many different species of each insect type (carpenter ant, brown tree ant, etc.). Similarly, there are different types, or groups, of bacteria and there are many varieties of each group. In addition, each group of bacteria behaves differently (some photosynthesize, others perform different chemical reactions). Some of these groups live everywhere in the ocean, while others are only found in certain geographic regions. 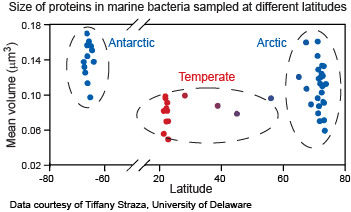 Additionally, bacteria from the same group do not necessarily look the same in every place they live. Current research is showing that bacterial cells living at polar latitudes (the Arctic and Antarctic oceans) have different sizes than the cells in more temperate locations. The volume of protein in these bacteria is greater, indicating that microbes are responding to their environment in ways we don't yet understand.

Scientists are still trying to determine how bacteria respond to environmental conditions.  This knowledge will help researchers predict the impact of climate change on microbial populations.

Are all bacteria active? 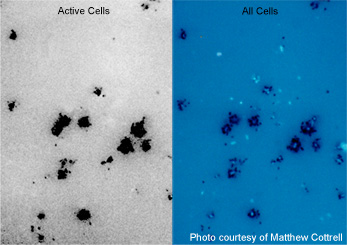 Some of the early scientists looking at microbes in seawater thought that maybe all the cells were dead; the cells were very small and looked different from bacteria grown in the lab. Plus, when seawater was placed on 'food' sources liked by lab bacteria, not many bacterial colonies grew.

Scientists are now studying just how many of the bacteria in different parts of the ocean are active.  One of the ways to do that is to give radioactive compounds to a live sample of microbes.  Active cells take up that radioactivity and are placed in a type of photographic film. Just like light develops camera film and creates a picture, the radioactivity in the cells makes a black mark wherever an active cell is located. When this technique is coupled with DNA staining, the number of total and active bacteria can be counted. Scientists are finding that up to half of marine microbial communities are active and growing! In addition, different groups are active at different times or in different places.

The types of bacteria present and their activity can change over smaller distances, depending on environmental conditions.  Researchers at the University of Delaware have been studying bacteria in a nearby estuary, the Delaware Bay. The principal characteristic of an estuary is the change in saltiness (salinity) of the water.  The water is completely fresh where rivers enter, and becomes saltier closer to the ocean.  Scientists were interested in the activity of different bacterial groups within the estuary.  They collected water samples at several different salinities (white dots) and brought the samples back to the laboratory. 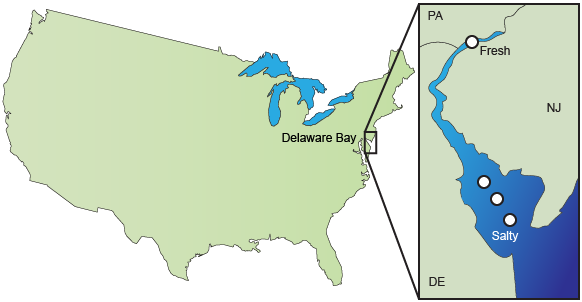 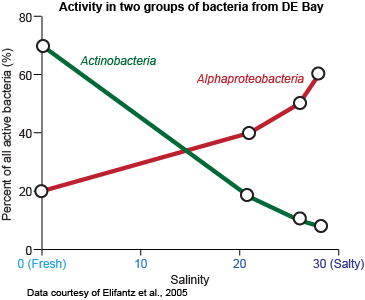 By giving the bacteria a sugary food source scientists could see which groups were active.  In the graph on the right, you see two of the most active groups (although there are many more), Actinobacteria and Alphaproteobacteria. As you can see, the Actinobacteria (green) are highly active in the fresher upper regions of the estuary. As the water gets saltier, this group makes up a lesser fraction of the total active bacteria.  The Alphaproteobacteria (red) show the opposite trend, becoming more active in saltier water, near the estuary's mouth.

These results indicate that environmental conditions (such as salinity or temperature) cause groups of bacteria to behave differently in different parts of the estuary.  Understanding why groups of bacteria are abundant and active in different places can help us understand important environmental cycles.  This knowledge is also critical in predicting how changes in the environment (such as climate change) will affect bacteria, and thus these cycles.