How are scientists investigating the effects of climate change on Chesapeake Bay? 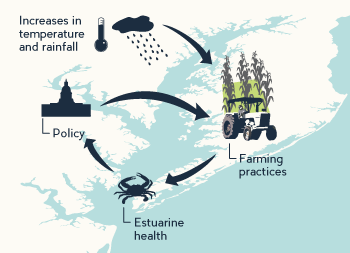 Scientists at University of Maryland Center for Environmental Science (Horn Point Lab and Chesapeake Biological Lab), John’s Hopkins University, Cornell University, and other institutions are collaborating to study how water flow into the Bay will change, how and why farmers will change their practices, how those changes will affect the Chesapeake Bay ecosystem, and what kind of policy changes could lessen the negative impacts on the estuary. They are primarily are using computer models to simulate future climate change effects and how those effects are linked across land, water, and human systems.

How will precipitation changes affect the amount of nutrients entering the Bay? 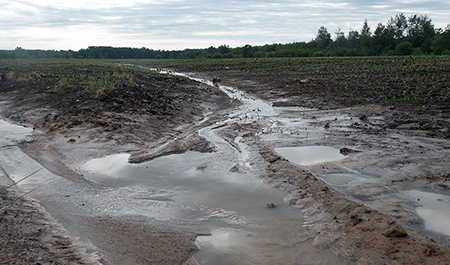 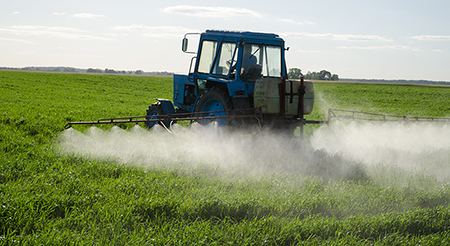 In addition, temperature increases have resulted in shorter winters, reduced snow cover, and a decrease in the number of frost days. As these changes intensify, they could (and in some regions, already do) affect agricultural practices. For example, farmers may be able to harvest two crops per growing season, a system known as double cropping. They could also plant their crops and apply fertilizer, which contains nitrogen and phosphorus, earlier in the growing season. As a result, scientists predict that large volumes of nutrients could enter the Bay earlier in the year.

How do these changes affect the Chesapeake Bay ecosystem? 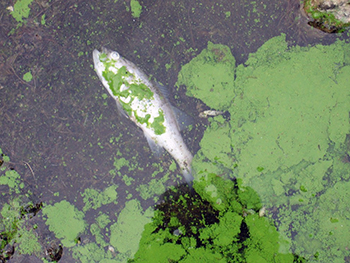 These changes may affect the Bay ecosystem because more nutrients fuel algae growth, which causes dead zones, or areas of low oxygen in which few organisms can survive (when algae die and sink to the bottom of the Bay, microbes decompose them and use up oxygen in the process). Furthermore, earlier nutrient delivery could cause the dead zone to appear earlier in the year. Therefore, changes in precipitation and agricultural practices could result in larger dead zones that are present for a greater portion of the year.

More info: Check out this interactive graphic to explore how changes in precipitation and fertilizer use could affect the size of the dead zone.

Policy changes that encourage farmers to decrease the amount of nutrients draining off their land could lessen these negative ecological effects. Research investigating exactly how much precipitation and nutrient inputs could change, how much the dead zone could grow and how long it would persist, and what types of regulations and incentives for farmers would reduce nutrient inputs to the Bay can help guide policy selection. It is important to note, however, that agricultural runoff is only one of many nutrient sources to waterways. Decreasing inputs from other sources, including urban runoff and sewage treatment effluent, also plays an important role in improving the health of estuaries. This case study demonstrates the importance of thinking about natural and human systems and the linkages between them as an interconnected whole rather than distinct, separate parts.
The module pages include 'Learn About' and 'Explore the Trend' and are available from the Modules menu.
Notice that this page contains a popup window with more information. You can open multiple popups at once and also arrange them on-screen.
All photos, diagrams and animations can be enlarged by clicking on them and you can open multiple images at once and arrange them on-screen.
There are interactive activities available. Try this one now - change the river temperature and then explore from there.
There are lesson plans and resources available from the 'Access Classroom Resources' tab.