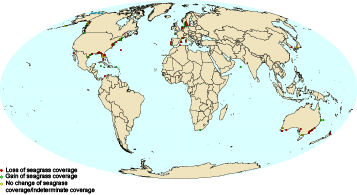 Seagrasses are declining worldwide, in many cases due to human activity. Coastal areas are often dredged to maintain deep channels for shipping. Dredging can impact seagrasses since they thrive in coastal areas. Seagrasses are also impacted by boaters who go into water that is too shallow and rip up the grass with their propellers.These are usually small scale losses. Large scale declines are often due to excess nutrients, sediments, and chemicals which run off the land into the water.

One of the primary reasons for seagrass decline is excess nutrients in the water, a condition called eutrophication. Algae can take up nutrients at a faster rate than seagrasses, so when nutrient levels are high algae blooms in the water column, on the sediment surface, and on the seagrass blades themselves. This algae blocks light, and seagrasses die because they cannot photosynthesize. 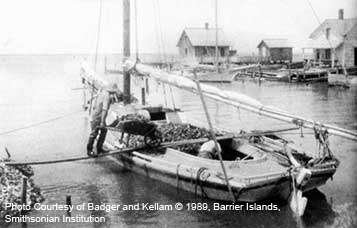 The decline of eelgrass (a type of seagrass) in the Virginia Coastal Bays began in the early 1930's. A slime mold infected much of the eelgrass along the Atlantic Ocean coastlines. In addition, a severe hurricane hit the Virginia coast in 1933. Since the eelgrass was already weak from the disease, the hurricane killed most of the remaining eelgrass on Virginia's coast. This decline was extremely bad for the local fishing economy. In 1930, before the seagrass decline, almost a million kg of scallops were harvested from the area. Immediately after the disappearance of the seagrass, the scallop catch was nearly 0 kg. 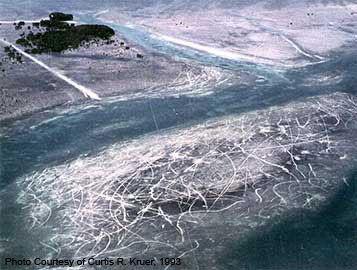 Some of the most extensive and diverse seagrass meadows in the United States are located in South Florida. This area is characterized by very shallow clear water and is a popular destination for recreational boaters and sport fishermen who target fish that live in these shallow seagrass meadows. In order to catch these fish, fishermen drive their boats into shallow areas where their propellers dig into the soft bottom sediment and rip out the seagrasses. The scars produced by these propellers can take over 10 years to recover, if no further disturbance occurs. 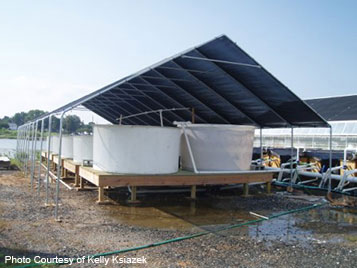 Because of the importance of seagrasses, many people are attempting to restore declining or dead seagrass meadows. In order to restore beds, adult plants can be taken from healthy meadows and replanted. This often only works for small restoration areas. Flowers can be collected and held in storage tanks until seeds drop. The seeds can then be spread over a larger area. In order for seeds or adult plants to survive, there must be good water quality. There cannot be an excess of nutrients, and sufficient light must be able to reach the plants. One of the largest and most successful seagrass restorations has been in the Virginia Coastal Bays. This success is in part due to the fact that the water quality is good.