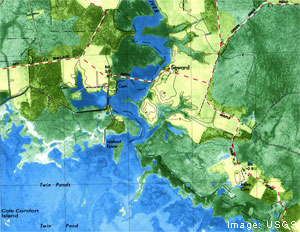 Sea Level is the sea height relative to a benchmark on land. Sea level rise is an increase in sea height over a period of time such that fluctuations due to tides and waves are factored over time, e.g. months to years. Over the past decades, increases in sea surface height have been attributed to increases in temperature of the ocean due to global warming. As water is heated it expands, resulting in inundation of coastal areas. Additionally the melting of the ice caps contributes to the rise in sea height.

Storm Surge is the rise in sea height due to the “pushing” up of water onto land by winds contained in storms, such as hurricanes. Factors determining the height of the storm surge include the strength of the wind in the storm, speed of storm, and slope of the sea floor leading to the shore, and stage of tide (high or low).  For more information, visit the Hurricane Preparedness website's storm surge page.

To explain what areas of the coast line will be flooded in a given number of years; to predict flooding from storm surges.

1. Locate the following on your topographic map and note the color:

2. Using the non-permanent markers, trace the shoreline of the area, circle major buildings such as schools, churches, and mark several main roads.

1. Using the information provided in the table below, determine the current rate of sea level rise in mm per year. 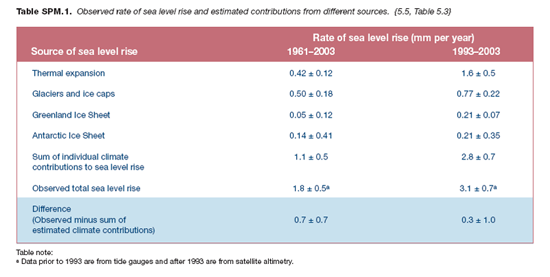 2. Determine how many years it will take to flood the areas listed below.

4. Use the contour lines on your topographic map to draw in the new coastline after 100 years of sea level rise.

1. Choose any coastal area from the US East Coast. Use one of the following websites to determine when high and low tide occur today in your area.

Maps can be ordered from the United States Geological Survey (USGS) map store. Be sure your maps are topographic maps with contours and get the educator discount, which is quite significant!